July was a very long month; with work, travel, grand opening parties, and all things life, it required a conscious push to march hard toward each thing that was ‘next’ on the docket.  It was a definite challenge to constantly fire on all cylinders, but it was worth it, and thankfully interrupted by a handful of very memorable and unreasonably perfect summer nights.

While summer nights in Charlottesville all typically equate to the good life, there was one Saturday in particular that stood out from the rest.  It had been a pretty full day of MADness (see this post for a more macro level recap) and life-things, so by the time 5pm rolled around, I was ready for a low-key summer cville night and I knew exactly where I wanted to go: the Sarah Bareilles concert at the n’Telos Wireless Pavillion downtown. 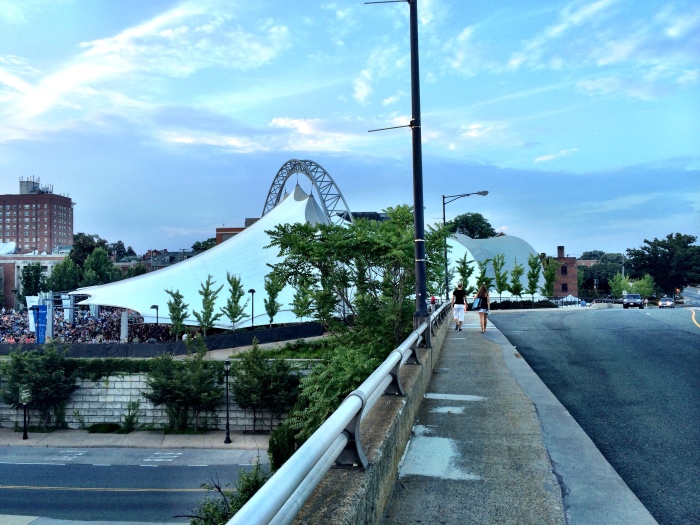 It might not necessarily sound like a relaxing night — going to a concert — but one of the most beautiful things about Charlottesville is just how accessible and intimate the entire downtown scene is, concert venues included.  You would think that being such a small town with smaller venues might not attract the same caliber of artists, but it’s just the opposite.  We are spoiled.

By 5:15 I had convinced Elly and Dar to come with me; at 5:30 I had all of our tickets in hand.  By 6pm I had picked them up in the party bus (enjoy the slightly exaggerated mental image) and we were en-route to Bella’s for a little pre-show wine and dinner. It was the perfect prelude to a ladies night out, and I didn’t think it could get much better – but it did. 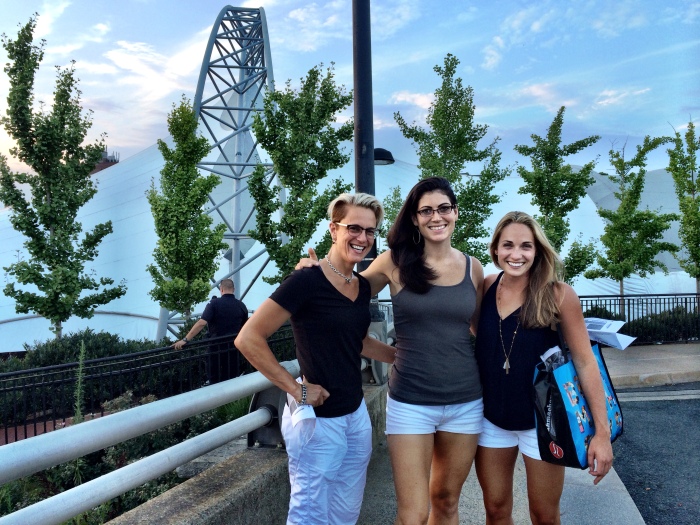 The weather was perfect.  No humidity, low heat, rain AND insect free; a seemingly impossible combination.  Add on a box seat upgrade from MAD auto girl herself, Jamie Schwartz, and you’ve got the best of everything right there.  Also, she played this song, which might have completed my life. 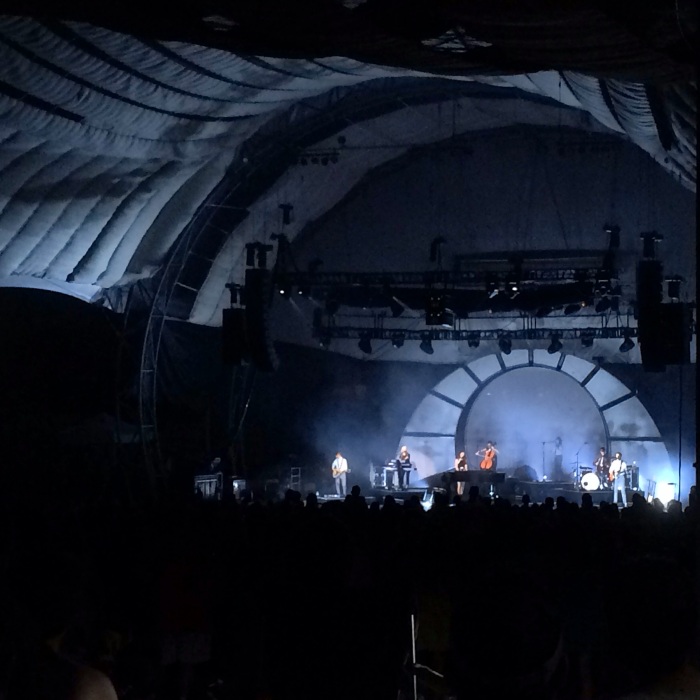 Fast forward two and a half weeks; skipping over week 1 of work back in Charlotte, all of the adventures in Charleston for the Grand Opening party, CLT work week 2, and say hello to this past Monday which brought the 2nd Installment of Sarah Bareilles into my summer, this time with 3rd row seats at the Uptown Amphitheater at the Music Factory. 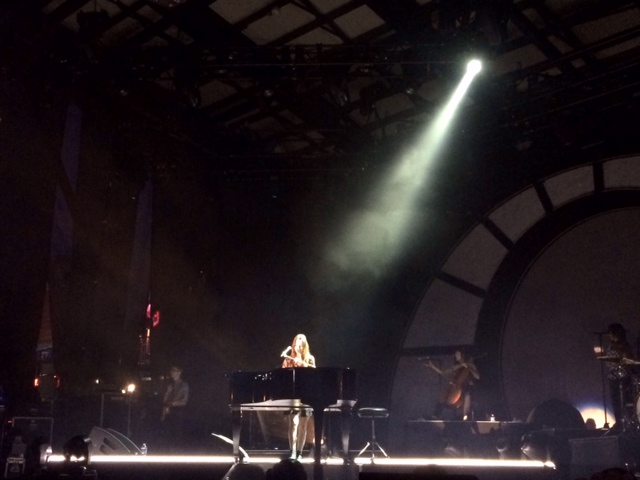 Sometimes you just need it; lyrical connection, live music, an escape from the day to day, and a night out with friends.  The Charlotte show brought another night of seemingly impossible summer weather: no humidity, low 80’s, and just a general calm in the air that lends itself directly to a state of relaxed euphoria.  Tack on 5 people I love, and you’re really gaining momentum.

I’m not sure what it is about this particular artist; if it’s the nostalgic connection some of her songs have to my happiest and most painful memories, or if just the perfect storm of conditions and known songs was enough to peel back every layer of stress and concern that have formed around me, but I seriously considered quitting my life to follow this tour and see if I can find all the answers somewhere between the verses.

Since I had this same feeling at the Delta Rae show in Charlotte just a couple of months back (good thing it was their last tour date), I’m going to chock it up to being a love and connection for music – live music specifically – and am committing to doing a better job of making time for these blissful life escapes.  We all need a break from time to time; a recharge, and reconnection, to reflect and process the chaos that came before and will undoubtedly come after.

So, that being said….who’s got any good suggestions for must-see shows?

View all posts by valeriemorini

People, places, and a limited number of things; filling in the blank for what I’m grateful for, today and everyday throughout 2020. Today, I’m exceptionally thankful for the opportunities in front of me to realize some long standing goals, and to close the loop on some key life evolutions. Might be a little vague sounding, but it will unfold with power, clarity, and all the strength that has been built. Bring it on 2020, I’m here for this. #Fuelswestgrow #goals #gratitude #appreciation #2020vision
In 2020, it’s all about the gratitude for what the last few tough years has built, and I need to start right here, right where I am. As we head into the downhill of these @hudsonyards moves we needed to take a pause at @goodmorningamerica to celebrate these leaders that I’m so thankful to have on my team, who worked tirelessly to make sure this project stayed on the rails. There are 200+ additional folks on the team that aren’t pictured, but I’m thankful for every single day for keeping the wheels not only on the bus, but also going round and round. We had a lot of change this year, and it wouldn’t have been possible without everyone’s energy, humor, and commitment. Thank you all for everything you do each day to make me better as a manager and stronger person. Okay, enough feels 🥰👊🏼🤩 #myteamrocks #gma #gratitude #appreciation #teamwork Thank you @torimorini for always getting us the good seats. ♥️ and for being you, boo.
This morning I took the time to tread after a late night at work. Adventured further into Chelsea and hit up the @onepeloton tread studio for a quick bootcamp fix, and hit the reset button. It’s amazing how peaceful this city can be with just a few moments of exhale and calm from all the noise. #peloton #tread #bootcamp
Hello from NYC. It might also be bye from NYC. One thing is for sure, and it’s that I’m officially from the south now. I’m not good at winter. ❄️ ❄️❄️ (I’ve always been good at hot chocolate, and some things never change). #NYC #winter #coldAF #myfaceisfrozen #irequireheatersandblankets
Office views 🥰
The luckiest this weekend to have such a strong stretch of really fun classes, old friends who make me feel so loved, new ones bringing fresh energy in the doors, and new year vibes that reconfirm that the last decade was only just the beginning of the best. Big things to come, building off this foundation, all the lessons securing the base, and all the opportunities that it’s all created. Over and out for a few weeks #cville, I’ll see you on the back end of the month, and I know you’ll still be beautiful. @m3coretraining #cville #charlottesville #megaformer #functionalHIT #newyear #goals #strength #power #endurance
Happy birthday to you @torimorini ♥️♥️♥️ have the best day and an even better year! 🥰
Out with the old and in with the new; that’s the 2020 motto for this fresh new decade. Last photo I shot with my old phone, first photo with my new hat and the air of change that it’s cutting right through. #thewholedamnthing #2020 #fuelsweatgrow #newyear #sameyou #betteryou #intention
Wishing everyone a very merry day 🎄♥️🎄