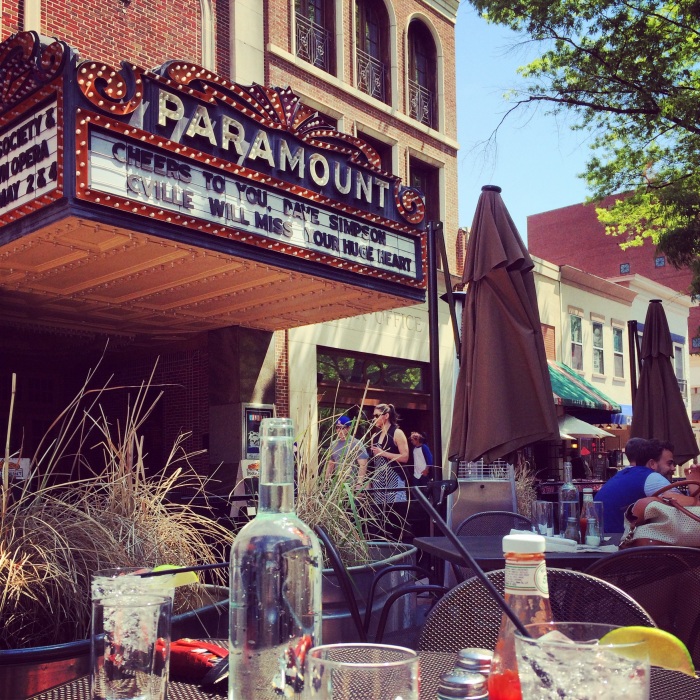 We’re only 4 days into the month and I’m already missing May in Charlottesville.  After starting off the week with three straight days of miserable rain, high 70’s and sweet spring air has been more than welcomed around here.  It’s usually tough for me to pick an absolute favorite time in Cville (it usually spans from spring through late fall) but the extended winter has me so grateful for each day that my body welcomes in vitamin D, and I’m loving hard on this late spring.

This weekend definitely included a long list of to-do’s, prepping ourselves and MADville for our long departure from the day to day, but there was no shortage of the spring weekend things that make this place so magical.

Friday’s After Five was of course the end of the week highlight for the group, which included a core contingent of our MADville members, several of which had used the 12:15 class as the start to their weekend, working their way through the downtown bars until 5pm became an official reality.

I’ve recently switched over to white wine as I’ve eased my way back into the warm weather, but I haven’t drawn a hard line in the sand.  I think white will just continue to be my outside drink and I’ll relish the indoor moments that red and I continue to have.

One of the least obvious things that I absolutely love about Friday’s is the kettle corn.  I’m obsessed with it.  It’s the end of the week treat and pre-dinner snack that I work towards, and the fact that they’re making it hot and fresh right there just makes it all the better.  I didn’t realize (because I live under a rock?) that you can actually buy this stuff in stores all around Charlottesville – but to be honest, for me, it’s the experience of the in-the-moment purchase that makes the experience so special.

Saturday brought an early morning of MADness, but for the first time in what seems like forever, it was just for operational support.  Saturday is actually my favorite day in MADville and you’ll rarely see me sitting out, but after the previous four intervals I did this week I needed a break – body and mind.  I’m always on the later end of the City Market, so I made a point to get there before 8am yesterday, scooting right over to see Erin McDermott for a little jewelry shopping before the masses.  And of course, I got it all packaged up in sweet little bags, just because she’s always adorable like that.

I made my way back to MAD in plenty of time to check out both morning classes, and watched two packed classes experience what we by far the most grueling interval of the week.  Sorry guys, you’re better for it.  Brunch happened at The Southern (again) for a little business meeting with our friends who are launching Swim s’cool this summer in Charlottesville, and then it was back to the gym for a private class with the Sigma Kappa sorority chapter from UVa.

After everything at MAD was wrapped up, errands happened, including a late lunch at Zoe’s Kitchen (Greek Salad, no potatoes, add grilled chicken), and finally wrapped up in enough time to take the dogs for a walk.

The rest of the night was spent celebrating a very special 2nd birthday. 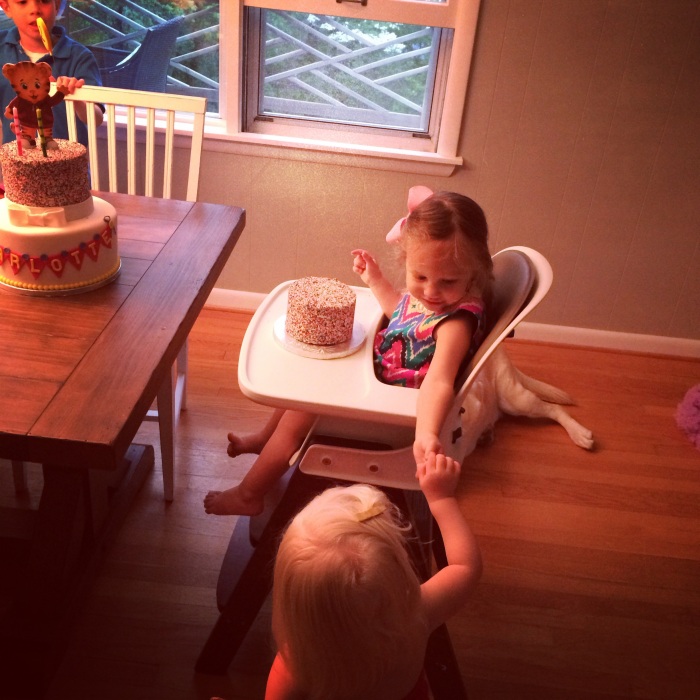 Sweet Charlotte turned two, and despite having her own personal smash cake, she preferred to delicately and intentionally share pinches of her cake with her best friend Eloise.  The cake was of course done by Maliha Creations, and was the best cake I’ve had since the last cake she made, and that’s a pretty high standard to hit.

All in all it was another great weekend in Charlottesville, and the last May weekend I’m going to spend here this year so I tried to soak in every last second.  I head back to Charlotte mid-week this week, and down to Charleston next week to finally get MADabolic Charleston opened and rolling with preview classes and the much anticipated grand opening.   At this point I think it’s safe to say we’ve essentially missed spring, so let’s do this summer, I’m ready for you.

View all posts by valeriemorini

This is such the mood right now. . . What the picture doesn’t communicate is the fact that just before this was taken, a bird had flown in through the bug-sized opening in the sliding door downstairs and took refuge in this (fake) fiddle leaf fig in bug’s upstairs loft. What many of us may have projected as our own longing to leave the house amidst corona, is actually bug’s longing for tweetie bird, in her little mouth. . . On the up side I saved a birds life today, and kept Bug from being a murderer for another day. Which is only a matter of time at this point. #parentoftheyear #ileftthedooropen #invaded #inevergotcloserthan6feettothebird #iswear #toomuchadrenaline
Heard a surprising knock on my door and found this weeks treasures on the doorstep, delivered from @charlottesgarden 💐 . . This change over is helping me feel like progress is being made, time maybe isn’t standing as still as it feels, and there is beauty out in the world (also) waiting to reconnect. ♥️♥️♥️
This week we planned a Sunday late afternoon family bake sesh on zoom to fend off some very real Sunday scaries as of late. And it worked, like a charm. Heart and belly so full of love, nonnis biscotti and much needed laughter. So thankful for this crew during all the times, but mostly the hard ones. ♥️♥️♥️ #yepimalreadycrying #familycrier #biscotti #nonnimorinicooks #moriniscook @torimorini @mam_sorini @daynamo @lindsray17 @pistachiobaby @taiboguy @catalina_winemixer_ @emmitt_heath
There are no rules here any more. The mission is survival, and the blind acceptance of repetition. In this house, Chloe is our leader. She’s been preparing for this effort her entire life, and she’s exceptional at it. No where to go but Onward and upward from here. #bealeader #iwonderwhatherenengramis #rescuedogs #coronation
Jk, jk. Actually threw out my back, which is so much more fun. #2020forpresident #quarantineforever #stressfree #sarcasm
This year being the artist formally known as April.
“The only meaningful thing we can offer one another is love. Not advice, not questions about our choices, not suggestions for the future, just love.” So, here’s a picture of bug performing her most angelic act, offering me this sweet sense of ‘love’ in exchange for edible forms of love so that we can all continue to coexist in this exchange indefinitely. We worked out this system to keep the peace, and so far so good. So here we will be just exchanging forms of love. Seemingly forever. And ever. 🥴
Yesterday I had to brave the market to restock my food supplies, something I haven’t done in months thanks to delivery services, and while the mission was a critical one for supplies (I ran out of my @stokcoldbrew and @califiafarms better half 🚨), these flowers spoke to the little light that was being ignited by the beautiful weather, and they became my new essentials. Food be damned, the joy these flowers have brought me in the last day has been tremendous. So, I’m sharing them with you. Spring is here, the flowers are thriving, even inside, and you can too. #deepthoughts #flowers #thislittlelightofmine #spring #coronatimes #exhale
Today, @torimorini asked me to do a thing. And it wasn’t the thing that was really the ask, it was the fact that I had to cover up my yoga / WFH uniform with a sweater fit for public consumption that was the real thing. I had to look like I haven’t been a captive in my own house and emotions for the last 2 weeks. And that my friends is the stuff that love is made of. ♥️♥️♥️ It’s also worth noting that I brought my lucky elephant friend from @erinmcdermott1 out of retirement to help me harness the emotions that came forth from being asked to adult like an adult. Sometimes we all just need a little woobie. #lifeishard #wecandohardthings #untamed #familylove #letspretendlikeimanadult #whyisgettimgdressedsohard