I’ve been feeling pretty anxious and overly committed lately, so last weekend I made a very concerted effort to take time to do some of the things that too often get dropped from my schedule.  Aside from taking full advantage of the additional hour of sleep, I managed to squeeze in two massages (yep, two), a mani/pedi, and back to back trips to Home Goods.  That last one might not sound restful, but for me it’s damn near a spiritual experience for me these days.

And while all of those things were great, and definitely contributed to a few necessary zen moments, the most important thing I did for my overall well-being was an extended  (un-rushed) and completely unplanned full-cart adventure at Trader Joe’s.

It had been a while since I strolled through TJ’s Isles, and it felt great to be back.  It’s so easy to fall into the routine of going to Whole Foods, and blindly adapting to the $250/trip sticker shock until it almost seems uncomfortable to spend less.

I held back at nothing — I bought enough meat, produce, and ‘extras,’ to last through the full week, and a few bottles of wine to make it (me) whole.

On Sunday night I roasted the chicken, cauliflower, and spaghetti squash — all which turned up in Monday’s meal of leftovers.  I also took some extra time on Sunday night to revisit the Apple Streusel (Egg) Muffin recipe, thanks to a special and fresh delivery of Granny Smith apples from Carter’s Mountain Orchard.

These are pretty easy to make, and this time just by switching to coconut oil spray (rather than trying to manually spread oil with a paper towel…) and letting the apples cool before mixing them with the eggs, the batch turned out just a little better.

With the fridge stocked full of groceries (and some pre-made daytime meals), I got to have a little fun with dinner this week.  Ingredients included: 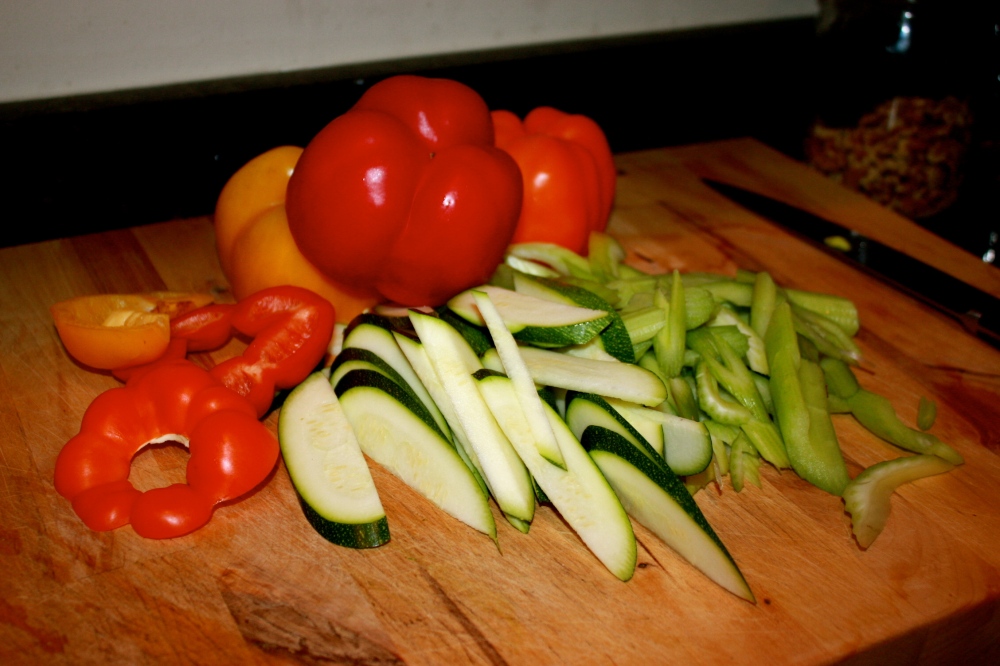 And of course a glass of wine on the side, which is optional (just not if we’re going to be friends).

The idea for this meal was to make a (non-peanut) Thai Chicken Stir Fry.   And, if you ask me, it worked.

I started by (cutting up &) sautéing the chicken in some sesame oil.

Once it was a light golden brown I placed all the chicken on a plate, and threw the cauliflower (finely chopped) into the remaining oil to fry it up like rice. 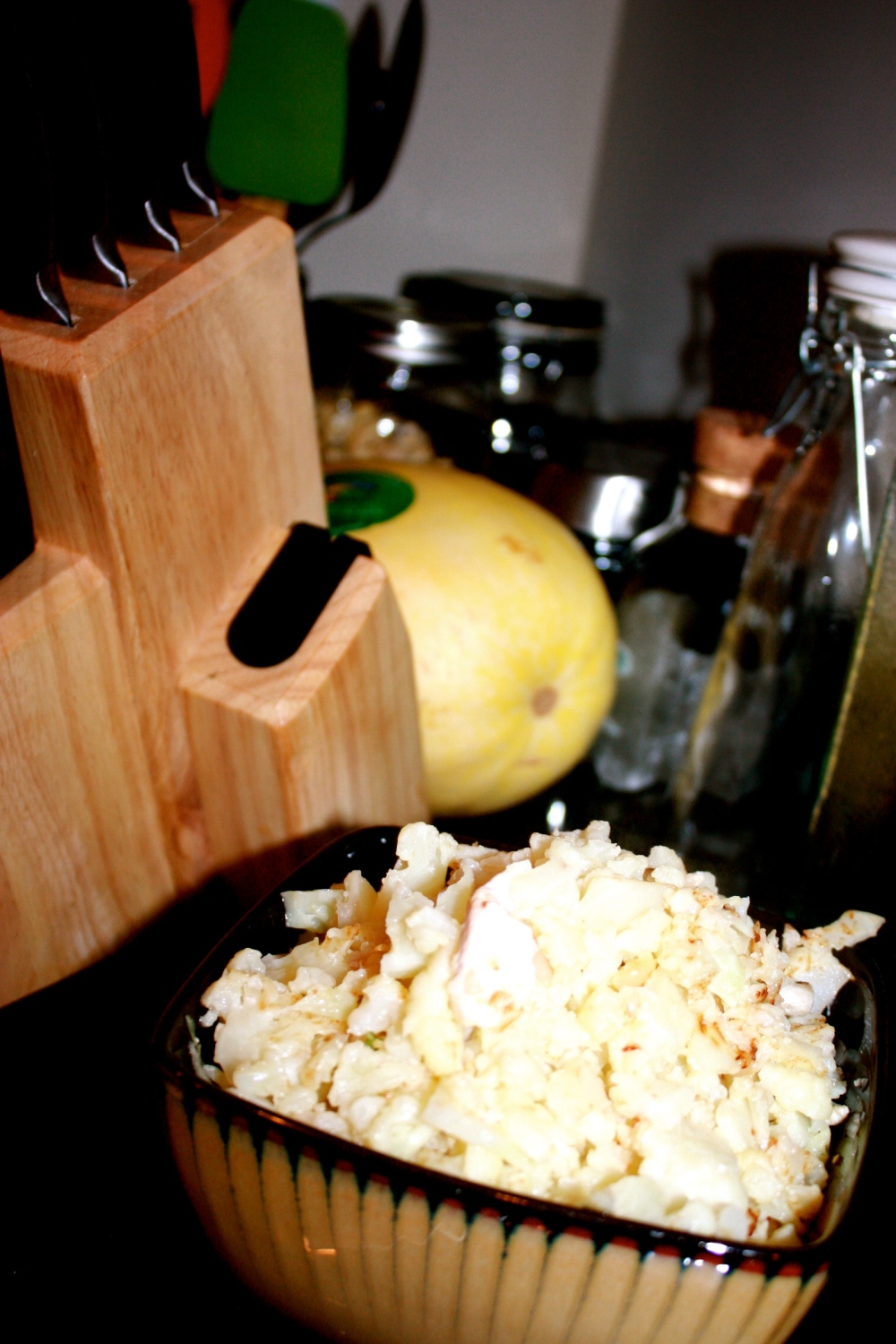 Vegetables were next.  Cut in long slivers (where possible) and simmered in coconut oil to give it a sweet flavor, they cooked until they were tender

Then came the ever-too-simple part that made all the difference in the world – I mixed almond butter and coconut milk in a little tupperware, and shook it until it blended into a nice sauce and poured it over the vegetables to finish. 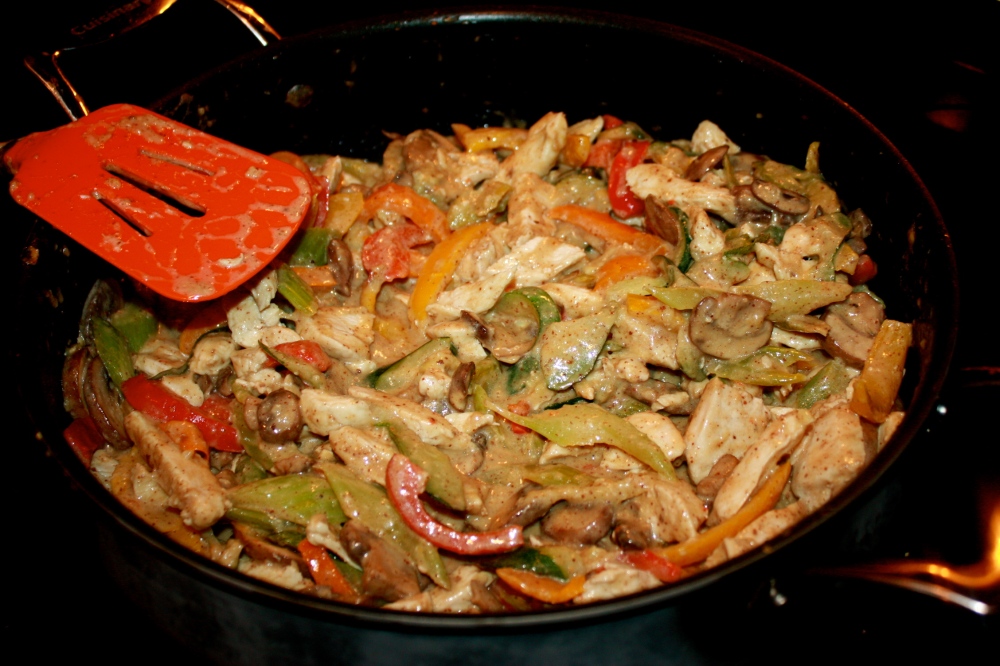 Despite being born out of zero planning, and mostly just a desire to use what was stocked in the fridge, I have to say this is one of the best meals I’ve cooked in the last six months…. humbly speaking of course.

There’s really nothing like taking time in the kitchen to create when things are getting a little too stressful and real — and if you do it up big enough, mass quantities of leftovers can also help to ease the burden of lunch-time hunger games.

Well, there’s nothing like it if you get to reap the benefit of eating it.  Spectating, apparently, isn’t the jam when you’re a hungry little bug….