You know what the most beautiful thing about outdoor bars in the summer is?  Everything.  Seriously, everything.

Friday had been a long day that began with the 6:15 and 7am bootcamps, so as was probably pretty clear in friday’s post, that by 3pm I was ready to commence weekending.

Dar and I had a business meeting set up for drinks at LaTaza with one of our new favorite people, and it was exactly the right choice.  The outdoor seating was perfect, the tiki bar had my favorite cider [Bold Rock: Apple Draft] and there was a full dinner menu that was not just an extension of a regular bar menu.  I had the grilled flank steak with veggie substituted sides, Dar had a roasted chicken over a purple cabbage slaw and the first rice she’s had in over two months.  I give the food two thumbs up and a very enthusiastic high five.

1.) Margaritas began showing up in succession.

2.) The fabulous Sarah Hatch who happens to have just cut my hair the day before (she works at Studio 500 – check her out!) and her fabulous co-workers showed up for their own business social time.

The later it got, and the more the temperature dropped, the closer we all huddled into the fire.  I will say that it was  not smart of me to think having borderline long sleeves on was going to keep me warm enough, but let me tell you, once the weather finally cranks it up a notch, this is going to be the new place to find me on a friday night.  Mark my words.

Saturday morning was as gloomy as it could be for not actually raining, but a successful trip to the market did occur yielding some new meat from Wolf Creek Farms, and a good amount of leafy greens and asparagus from a local farmer.  There was still some meat left in the fridge from a trip to the Organic Butcher on thursday, so the Wolf Creek Farm goodies were stocked away for a later meal.

My body clock was pretty off, so at 4pm I found myself milling around the kitchen starting to prep for an early dinner with the grill warming up outside.

The spring mix was put to good use in basic salads with balsamic and olive oil with a little lemon and salt for seasoning.

A zucchini and squash saute with yellow and red peppers added to the meal as a great (and colorful) side that can be an awesome topping for chicken or beef.

Or, top some brown rice pasta as a lighter spring ‘sauce’ that adds flavor to the whole meal. 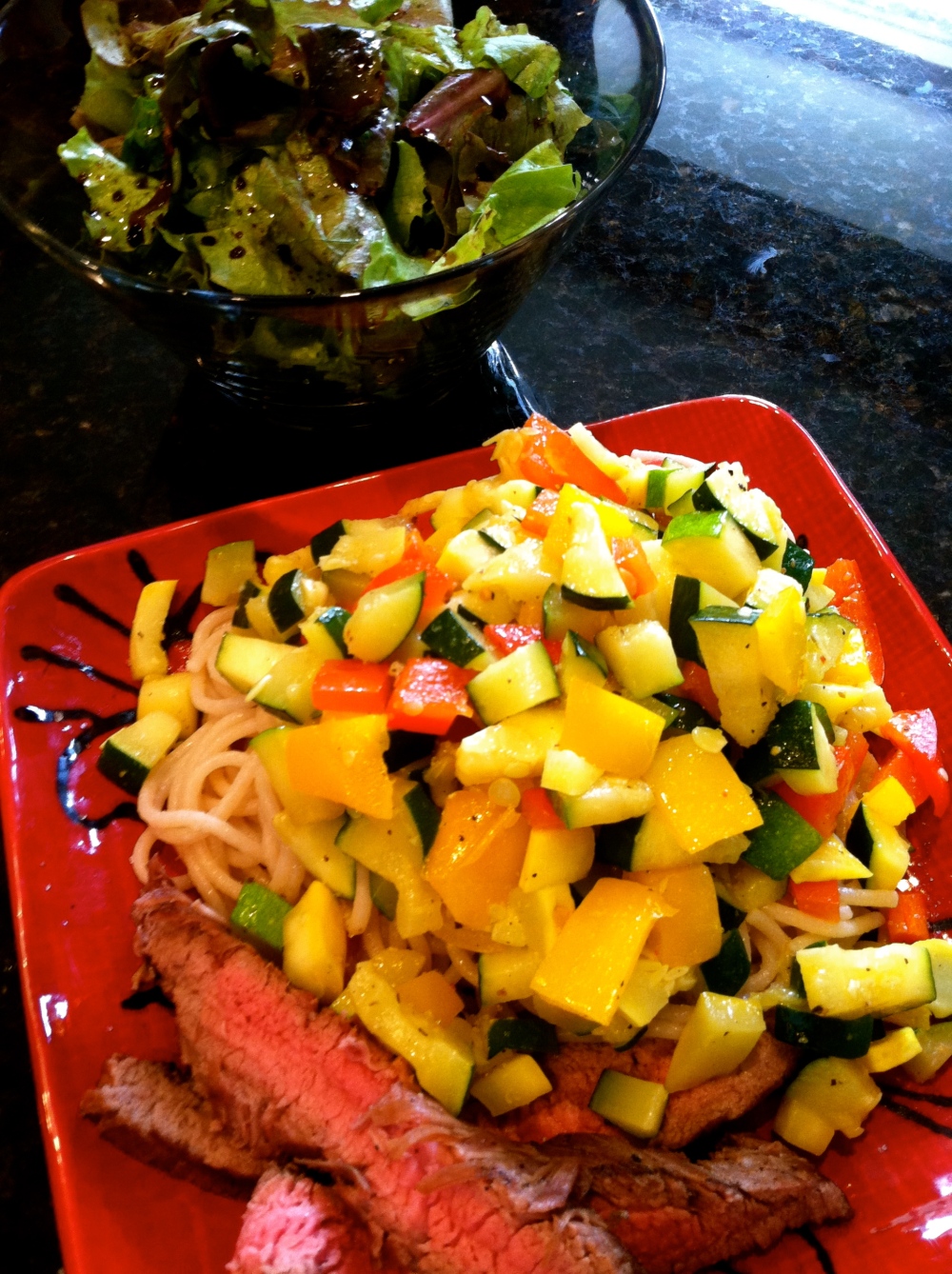 After dinner I took an hour or so to get a few things in order before taking advantage of the extra daylight hours on a quick run.

I have not been running much lately, at all, focusing more on lighter strength and cardio circuits as I build my endurance and immunity back up during recovery, but last night I just craved it.  I ran around the UVa campus for the first time in probably a year, which was a great return to the road.  Running slower than usual, I was able to take more in, inducing nostalgic memories connected to ‘grounds’ (as we call campus here at UVa) —  which is a different and much lengthier post for another time.  For the purposes of summarizing today: I ran, and it was excellent.

There is a ton going on around here right now, lots of announcements on the horizon, so I took the rest of the night to get my closet and life organized, made a post on my personal blog, and let myself unwind into a lazy Saturday night in.